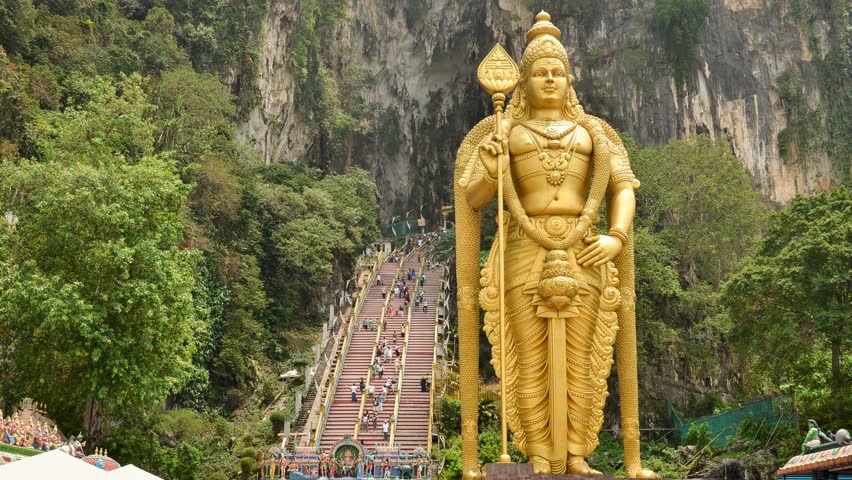 Lord Murugan is a popular deity in Tamil Nadu, south India. He is the patron god of the state as well. There are Lord Murugan temples in many places, even outside India, where there is a sizeable Tamil population. Murugan is also called Lord Subramanya and Lord Karthikeya. Other names are Skanda, Shanmugha, Kumara, etc.

The Lord Murugan temple in the Batu caves, Malaysia, is very famous. These caves, which are supposedly sacred, are dedicated to Murugan.

Malaysian Tamils celebrate the Tamil festival of Thaipusam in these caves. At Batu caves, one can find a statue of Murugan, which is one of the tallest statues of a Hindu deity in Malaysia. It is also the third tallest statue of a Hindu god in the entire world. The tallest is the Garuda Wisnu Kencana statue (Indonesia), and the second is the Kailashnath Mahadev statue in Nepal. The statue of Muruga in the Batu caves stands at 140 feet. It is a golden statue and has a magnificent appearance.

Here are 5 remarkable facts about the Lord Murugan statue at Batu caves.

1. It is the Tallest in the World

This statue of the god Murugan is one of the world’s tallest statues. It is in a temple and is 140 feet tall. It stands beside 272 steps that lead to the Batu caves. The statue was built in 2006 and was dedicated to Lord Ganesha, who is the remover of obstacles in Hinduism. Muruga is also the Hindu god of war and victory.

Ganesha and Murugan are brothers and the sons of Lord Shiva and Goddess Parvati. Shiva is the Destroyer, who destroys the Universe at the end of a Yuga, making way for a new cycle of Yugas. His consort, Goddess Parvati, embodies fertility, strength, and power.

The sculptors who made this sculpture took three years to finish the task.

The Batu caves were not a place of worship initially. They were actually the home of a tribe called Orang Asli, who were the indigenous people of Malaysia. It was an Indian trader called K. Thamboosamy Pillai who turned them into a place of worship.

In 1892, Thamboosamy installed a small statue of Murugan in the caves. Supposedly, he was inspired by the cave’s shape, which was like Murugan’s Vel, the divine spear of Muruga. It was Parvati who gave the Vel to him to fight the demon armies of Soorapadman. Lord Murugan was the Commander-in-Chief of the army of the demigods.

In the 1860s, Chinese immigrants came to the caves. They would collect bird droppings which they used as organic fertilizer on their farms.

Other attractions inside the compound of the Batu Caves Temple include the Ramayana Cave, the Hanuman Temple, and the Venkateswara Temple.

The Batu Caves Temple is a pilgrimage spot for the festival of Thaipusam, which honors Lord Murugan. Devotees come here to offer Kavadi to Lord Murugan as a gesture of thanksgiving for favors received.

To construct the Lord Murugan statue, 15 sculptors from India were commissioned. They took 3 years to complete the task. After they finished building the statue in 2006, it was unveiled during the Thaipusam festival. The cost of constructing the statue was 2.5 million ringgit (Malaysian currency). It took 350 tons of steel bars, 300 liters of gold paint, and 1,550 cubic meters of concrete to construct it.

There are plans to build another grand statue at 41.1 meters at the Kathirvel Murugan temple in Sornamalai, Tamil Nadu. This work will also be entrusted to the team of 15 sculptors who worked on the Batu caves Murugan statue.

The Statue is at a Strategic Location

Lord Murugan’s statue enjoys a strategic location. The Batu caves comprise one of the most remarkable structures in Malaysia. This series of caves are located on a limestone hill, and some are cave temples. The caves lie around 13 km from Kuala Lumpur and get their name from the Batu river.

These caves rank among the most famous Hindu shrines found outside India. Archaeologists believe that they are more than 400 million years old. The Batu caves comprise a network of caves that include the Temple cave, the Museum cave, the Dark Cave, the Fallen caves, the Sakai cave, and the Quarry caves.

Thousands of pilgrims visit the caves during the Thaipusam festival.

During the annual Thaipusam festival, devotees have to observe fast for a month. They also have to shave their heads before they carry the kavadi on Thaipusam. The kavadi is a special offering to Lord Murugan. To carry the kavadi, one has to perform the kavadi attam dance.

Non-Hindus, too, attend the Thaipusam festival, as it is very unique. The festival lasts for one whole day. People can take photographs of the kavadis and their bearers. Accommodation facilities are available near Batu Caves. Other attractions, too, can be found nearby.