Karthigai Masam (October – November) is a very holy month for Hindus in India. Many festivals are observed in this month which is special for both Lord Vishnu and Lord Shiva. People also observe vrathams during this month to propitiate the gods. 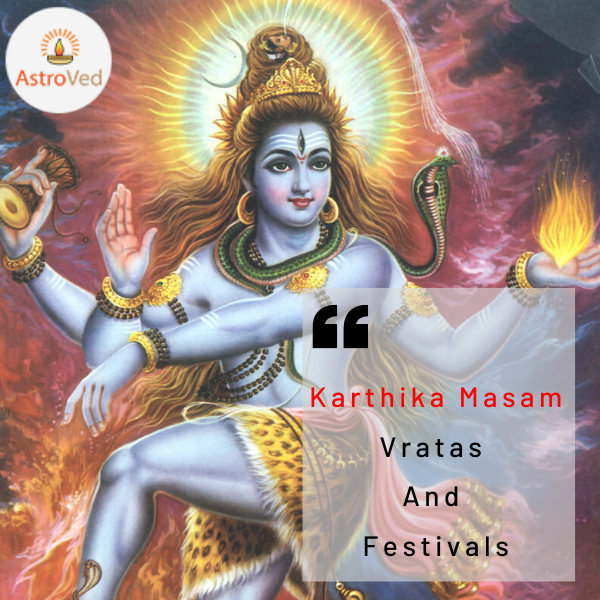 The first festival in Karthigai Masam is Yama Vidhiya. It is also called ‘Bhagini Bhojanam’ and it is a brother-sister festival. The story goes that Lord Yama’s sister Yami or Yamuna Devi was upset with her brother and so he grants her a boon to please her. On ‘Yama Vidhiya’, a man who eats food in his sister’s house will get relief for his sins. This practice still exists. Brothers visit their sisters’ houses, eat food and give or receive blessings.

Naga pooja is an auspicious festival that is observed in this month. The fourth day after Deepavali Amavasya is the day of Naga Pooja. After Nagula Chavithi, Naga Panchami and Nagasashti are also performed. This pooja honors the snake gods and is mainly performed by women. Married women who desire the well-being of their children perform it. They observe a fast as well. Milk and fruits are offered to the snake gods and Arthis are performed near the snake pits. A cobra with seven hoods, called Ashtanag, is specially worshipped.

In Karthigai Masam, people observe a fast on Ekadasi. It is believed that Lord Vishnu goes to sleep on Ashada Shuddha Ekadasi. He wakes up on Karthika Shuddha Ekadasi in Ksheera Samudra. People observe vratham the whole day and break their fast the following day by donating food and clothes to a temple priest or Brahmin.

On this day, ladies pray to Lord Vishnu and light 12, 16 or 21 lamps near a Tulasi Plant or gooseberry tree. These lamps or deepams are called Dwadasa deepams and the sight of rows of diyas lighting up every house is breathtaking.

In Karthigai Masam, the full moon or Pournami on Krithika Nakshatra (star) day is called Karthika Pournami. Observing a fast on Karthika Pournami day is equal to fasting on Shiva Ratri. The fast is observed for the entire day. 365 deepams are lighted to Lord Vishnu and devotees have darshan of the moon after which they break their fast. New brides undertake 33 Pournami vratham/ nombu. In the evening, they visit Shiva temples and offer Goddess Parvati pumpkin fruit, yam and food items.

This is celebrated in a particular way in Thiruvannamalai. Hindus celebrate the Karthigai deepam on full moon day in Karthigai Masam, when the star ‘Krithika’ rises. On the holy hill ‘Arunachala’ in South India, a huge beacon will be lit at this time. There is a story behind this. Once, Lord Shiva asked Lord Brahma and Lord Vishnu to locate his head and feet. As he assumed a gigantic form, they failed to find them. At this time, Lord Shiva took the form of a Jyothi (light of fire) on Thiruvannamalai hill. Today this is celebrated as a festival called “Annamalai Deepam”. On top of the hill, a special torch will be lighted and devotees believe that Lord Shiva’s Jyothi can be seen on this day.

Karthigai Pournami celebrations are associated with the demon, Tarakasura, who was killed by Lord Karthik, or Skanda. Another legend says that on this day. Vishnu incamated as Matsya avatar and saved Manu, the first man , from the Maha Pralaya (deluge).

Towards the end of Karthigai Masam and after Amavasya, Poli Swargam Poojas will be performed. A temple priest will recite the story. Lighted lamps are placed on banana ribs or stems and floated on lakes or canals. Karthigai Masam officially ends with this festival.

Mondays in Karthigai Masam are called Somavaram and fasting on these days is called Karthigai Somavara Vratam. The one who performs it diligently would enjoy all worldly pleasures and reach Kailas after death, thereby attaining salvation or moksha.

The fast is observed on ‘Shravana Nakshatram’ day which comes on full moon or Pournami day in this month. Devotees perform Rudrabhishekam and light lamps to Lord Shiva and Goddess Parvati. This will free the devotee from sins and cure all their diseases. If Rudrabhishekam is performed 11 times on this day, it is believed that the person will go straight to Kailas. Lord Shiva’s other name is Someswara; he keeps the crescent Moon or Soma in his matted hair. Fasting to both Lord Shiva and Lord Vishnu will bring Moksha. Hindu scriptures say that this month is a sin destroying month.

This vratham is observed on Shravana Nakshatram’ (star) day which usually comes before ‘Karthika Poornima. Rituals like Abhishekam and Rudrabhishekam are performed. Three ghee lamps are lit before idols of Lord Shiva and Goddess Parvati. The person who lights the lamps, it is believed, will get moksha and relief from sins. They will also reach ‘Kailas’ after they die.

This is a kind of annual picnic undertaken during this month in Andhra Pradesh. In Hinduism, plants are considered to have a divine nature and are worshipped as divinities. Tulsi, bilva, amla and durva plants are seen as divine and are used in poojas. The belief is that Lord Vishnu and Goddess Lakshmi like to reside under Amla trees during Karthika month. Hence amla trees are worshipped by Telugu people during Karthika Vanabhojanam. They worship Lord Vishnu and recite the Vishnu Purana and Karthika Purana as part of the Vana Mahotsavam rituals. During Karthika Vanamahotsavam, people cook food under these trees when the pooja gets over and eat the food as prasad. Nowadays, people observe Vanamahotsava as a cultural event instead of a religious festival. Some organizations go on an outing and perform the Vishnu pooja and take food in gardens nearby.

This vratham bestows Satya Narayana Swamy’s divine blessings. Lord Vishnu is the one who preserves the universe. This vratham is observed after our wishes get fulfilled. It can be performed in the morning or evening. Many people invite friends and relatives and feed them prasad after the pooja gets over. It is very important that everyone listens to the story.

This is a five-day ritual that is observed in the southern states of Telengana, Andhra and Karnataka. The vratham begins on Karthika Krishna Saptami and gets over on Karthika Krishna Ekadasi. During this period, people worship Lord Vishnu and observe a fast. On the fifth day of Uttuvana Ekadasi, the fast is broken and the next day, they celebrate Vishnu’s marriage to Tulsi. They may eat some fruits or take milk during the fast.

For this vratham, people fast the whole day and eat only after the moon comes out and the stars are visible. It is observed for almost the entire month. When this routine is performed throughout the month it is called Nattalu or Natta Vratham.