What does it mean to be a Police Officer?

Police personnel and the armed forces have remained the fascination of many people. Not only men, even women in large numbers dream of wearing the uniform, working in a disciplined environment, and serving the country and its citizens, as police officers.

Yogas refer to the astrological formations of a natal chart, which generally bring benefits to the natives. It is believed that for much good to happen in life, or for dreams to get fulfilled, a person has to enjoy some such Yogas. 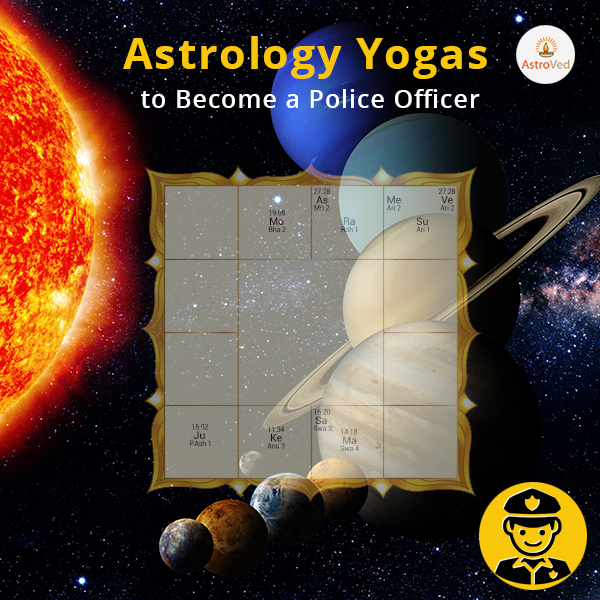 Mars is the warrior planet, which can bestow a person with courage, strength, aggression, and passion. It also represents weapons, bullets, etc. This makes Mars play an extremely significant role in propelling a person to the role of a police officer. Saturn can be said to follow Mars close by in this regard. Being the Karma Karaka, Saturn is the significator of profession, duties, and responsibilities. It is also the planet for justice and can make a person disciplined. Thus, Mars and Saturn are the planets that may count the most in respect of a person joining the police force.

The shadow planets Rahu and Ketu, among other things, stand for punishment and law, respectively. Hence these two can also have an impact on a person going in the police line.

Now, let us come to the Houses of the horoscope.

The Ascendant or the 1st House can very well be called the most important House of a natal chart. This represents the bodily frame of a person and can influence the physical aspects like appearance, height, etc. The association of the fiery Mars with this Ascendant House can make a person readily accept adventures and challenges.

As Mars represents courage among the planets, it is the 3rd House that denotes this trait among the Houses of a horoscope. If this House gets related to the Ascendant or its planetary Lord, and also comes under Mars influence, that can make the person daring and committed to serving the country in some capacity. The 6th is the House of enemies, and if that remains strong and is linked to the fighter Mars, that may bestow the person the will to battle the enemies and overcome them.

The 10th House is the Karma Sthana, the House of occupation. When the relationship between this House and the 8th House, which represents secrets, is quite strong, it can point to many possibilities of the natives joining the police force.

Also, Rahu’s association with the Ascendant or the Ascendant Lord, or with the 10th House or its Lord, can provide a person with sound ability to frame policies. A Mars-Ketu link can also be of help in this regard.

Now you must be having a fair idea about the astrology Yogas that can help to make a person join the police force. If you have a strong desire to serve either in the army or in the police, you can definitely bank on astrology to know what providence has in store for you in this regard. While professional astrologers who are experts in their field are available at many places for consultation, people can also seek the assistance of online astrology, to know about their prospects.

Trust you will be able to avail of their services to your best advantage and fulfill your dream of serving the country as a police officer.