Ganesh Chaturthi, Vinayaka Chaturthi or Vinayaka Chavithi is a popular Hindu festival that celebrates the birthday of the elephant-headed god, Ganesha. It is observed on the fourth day of the Hindu month Bhadrapada, (September- October). It is a 10-day festival, ending on the fourteenth day of the waxing moon (Anant Chaturdashi).

Ganesh Chaturthi festival is celebrated by Hindus all over India with great devotion. Families  celebrate it at home and people also celebrate it in their workplaces and public spaces. Large clay images of Ganesha will be installed in public pandals for group worship. The festival ends with the ‘Ganesh Visarjan’ during which the idols are immersed in the water. Processions with hordes of people accompany the idol singing and dancing. People from across the globe visit India to witness the celebration. The festival is grandly celebrated in many major Indian cities. Mumbai, Pune, Goa, Hyderabad, Bengaluru and Chennai are some of the cities which host such celebrations. 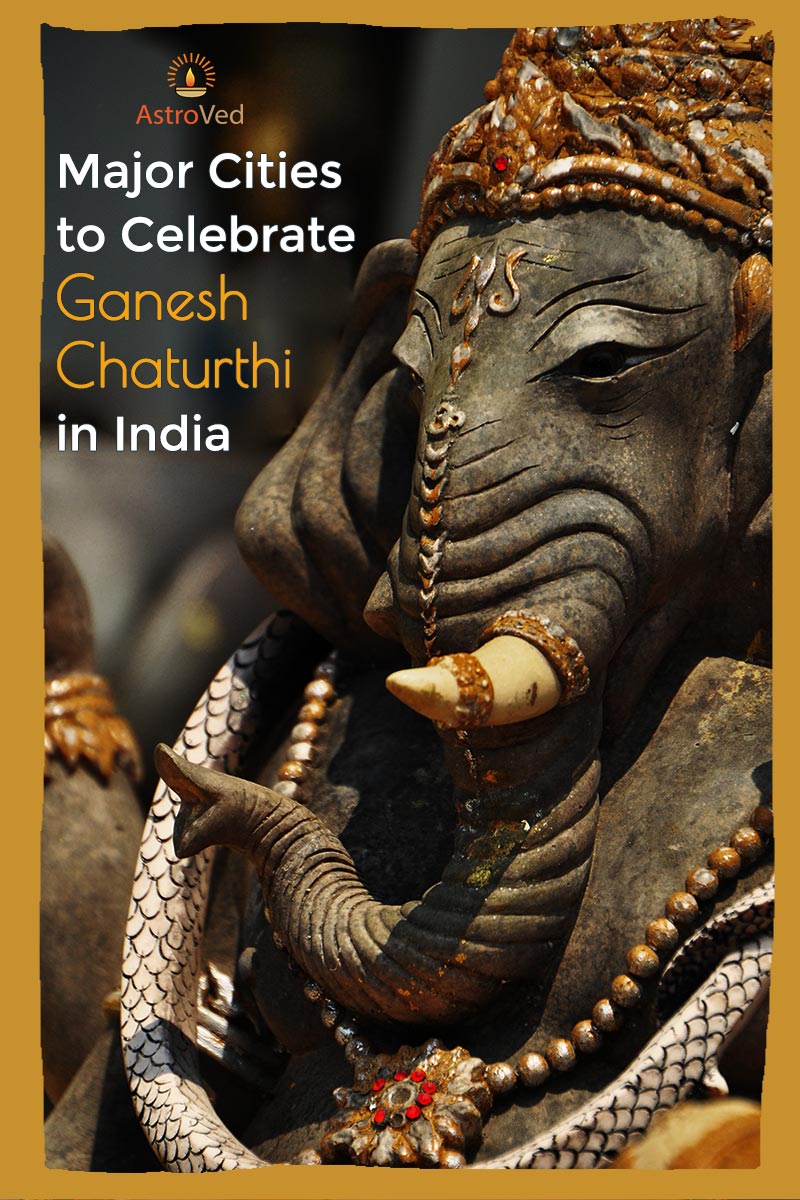 Ganesha Chaturthi has a historical connection with the state of Maharashtra. It was the Maratha chieftain, Shivaji, who began the festival, and later, the freedom fighter Lokmanya Tilak, also helped to popularize it. the city of Mumbai celebrates the festival with vim and vigor. Huge pandals, colorful rangolis, etc are part of the celebrations. Priests perform aratis, and prayers. DJs play pulsating music and a pot of curd is hung 50 ft above the ground in a public space. sung, pulling Ganesh statue on the cart, Dj music on, and the most exciting part is the contest to break a curd pot. Groups of young men form human ladders to reach the pot and the team which manages to break the pot wins a prize. The idol which is installed in each pandal is called ‘Raja.’ Idols of Lord Ganesha are decorated colorfully and are installed in homes and Sarvajanik Ganesh Pandals. Some of the famous pandals are Mumbaicha Raja, Lalbaugcha Raja, Siddivinayak Temple and KhetwadiGanraj.

Pune, a city near Mumbai, also celebrates the festival enthusiastically. A highly popular venue for the celebration is the Dagdu Sheth Halwai temple which is named after a sweet vendor. The visitors include ministers. celebrities, ministers and other influential people. Lord Ganesha is considered to be the patron deity of Maharashtra. More than 6000 idols are commissioned in Mumbai every year for the festival.

Ganesh Chaturthi usually lasts from seven to ten days. On the first day, the idol of Lord Ganesha is placed on a podium which represents a throne and is worshipped. At the end of the festival, the idols are immersed in a water body. This is called ‘Ganesh Visarjan’. The most famous immersion happens at Chowpatti Beach. A huge crowd gathers here to witness the event. The processions which kick off the Visarjan start early in the morning and often end only at mid-night.

Pune is the cultural capital of Maharashtra and is known to host one of the best Ganesh Chaturthi celebrations in the country, competing with Mumbai. Ganesh worship was widespread in Pune during the rule of the Peshwas, to whom the elephant-headed god was a patron deity. The festival is the most celebrated event in the religious, social and cultural life of Pune. The top 5 Ganesha idols are Kasba Ganpati, Tambdi Jogeshwari Ganpati, Guruji Talim, Tulsi Baug Ganpati and the Kesariwada Ganpati. It is in this order that the idols are immersed on the final day. Other than these, another reputed mandal is the Dagdusheth Halwai Ganpati which makes replicas of the popular Indian monuments and temples.

The Pune festival is held during Ganesh Chaturthi. This celebrates art and culture, custom and tradition and also features song and dance. There will be programs like classical dance, music recitals, films, plays, car and bike rallies and traditional sports events.

Bangalore is a very hip and happening city that attracts young people from all over the world. It is also known for its eco-friendly attitude. Even as the city celebrates Ganesh Habba (festival) with great zeal, it tries hard not to harm nature. In many of the street corners and pandals one can see mostly eco-friendly Ganesha idols. The popular pandals are found at Panchamukha Heramba Ganapati Temple, Ananthanagar Ganapati temple and Shri Jambu Ganapati Temple. The immersion of Ganesha idols is done in Ulsoor lake or Sankey tank.

Hyderabad too celebrates Ganesha chaturthi with great devotion. The largest Lord Ganesh idol in the world is installed near Khairatabad State Library and is immersed at Hussain Sagar Lake. It takes several months to build it. Ganapathi Navaratri utsavams begin on Vinayaka Chavithi (Ganesh Chaturthi) and conclude on Anantha Chaturdashi day. Nearly 75,000 Ganesh pandals come up in the city. The most well-known places where the idols are installed are Khairatabad, Kamalnagar, Balapur, Durgam Cheruvu, Chaitanyapuri, Old City (Gowlipura) and New Nagole.

Khairatabad (Hyderabad) hosts one of the largest Ganesha idols in the country. It is installed by the Khairatabad Ganesh Utsav Committee. Balapur Ganesha is reputed for its Laddu auction since 1994.  Gowlipura Ganesh Pandal is one of the oldest and most popular Ganesh utsav samithi in the Old City of Hyderabad. As the idols of Lord Ganesh are immersed in the Hussain Sagar Lake (Hyderabad), huge crowds of devotees join the procession and chant Lord Ganesha’s name.

Goa is the smallest state in India and also one of the most popular tourist destinations. It is known for its lovely beaches, churches and temples and world heritage architecture. The Ganesh festival has a special place in the hearts of Goans. It is a time for fun and frolic as well as worship and devotion. More importantly, it is an occasion for family and friendly reunions, exchange of gifts and merrymaking.

Various idols of Lord Ganesha in different shapes and sizes are adorned and installed in decorated pandals by different associations and groups. The festival enjoys a special significance in Mapusa, which is renowned for its temples at Ganeshpuri and Khandola. Marcela is another village where this festival is celebrated as it has several Hindu temples. Many artisans in the village make the idols of Lord Ganesh in a creative manner. The idols are made using Arecanut, Cane, Coconut and Bamboo.

Ganesh Chaturthi or Vinayagar Chaturthi is an important festival in Chennai too and is celebrated with great passion and fervor.n here. Pandals in different sizes can be seen everywhere. Huge loud speakers are installed near the pandal and children can be seen attired in Lord Ganesha costume. Devotees visit Ganesh temples and pandals with garlands, coconuts and tulasi for offering prayers. Vermilion and turmeric have an important role in Hindu rituals here and the Lord is seen covered in turmeric and vermilion.

Though these are some of the major cities which celebrate Ganesha Chaturthi on a grand scale, most small towns and villages too have their own Ganesha Chaturthi celebrations to honor the beloved elephant-headed god, Lord Ganesha, who is revered as the remover of obstacles and the symbol of auspiciousness.